Working on a new blog

It's been a long time since I authored a blog posting. It's not that I've been away from tech or not having the time to post, but I wanted to create a new blog focused on technologies I'm focusing on at work. Right now, my work has been looking towards goals with reducing hours in the Operation Center, which leads me to explore automation platforms like Ansible and Python in general. So this month I'm going to fork off this blog and create a new blog which contains the tech stuff, then my personal blog (this one) will stay with life topics.

Hope this makes things easier for myself and especially my readers.
Posted by Rob at 9:20 AM No comments:

Looking back upon O'Reilly School of Technology

As mentioned in the news, it looks like O'Reilly School of Technology is closing and giving students until end of this year to complete their course work. I posted about O'Reilly and my experience with the intro Linux class, which I liked but did have some objections. Basically, with the cost, felt you should have more materials and features included.

Looking back at the class, comparing this with the offering in 2015, it's very hard to justify the cost. Let's just use the example of the Intro to Linux class, at the time was close to $250 after a large discount. You can basically complete the same class for free through the Linux certification and Edx. Not only that, but the amount of resources has grown, not to mention more videos plus books. In other words, it's hard to pay staffing for a paid class if it's competing again free resources.

I'm hoping in the future we still see a trend towards more Linux based training. With the trend of learning to code making big waves, I still see a large lack of using Linux or even helping people take their code to live use. It's like many of these code schools are missing the gap, and they don't explain any sysadmin skills that would allow users to become "full stack".
Posted by Rob at 11:46 AM No comments:

This process was a bit confusing and according to the official Red Hat documentation, has a few missing steps. I found the answer from another blog and this helped finally get to the real fix. Note, this is tested on CentOS7 on a VMware Workstation Virtual Machine.

1. During the boot process, press the E key at the Grub2 menu. 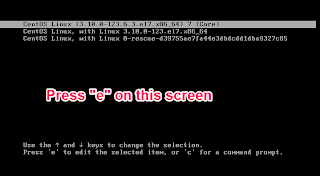 3. Remove the following entries from that line, "rhgb" and "quiet". If you leave these, they mess up the console and do not allow a password more than one character.

4. Add the following to the end of the line.

6. Once the system is booted, you will be at the root user in single user mode. But this is a read only file system. Validate this by using the following command. This should fail. # touch /tmp/test

7. You need to mount the / filesystem. Use the command as follows.

8. Test again that you can write to / after the remount.

10. Touch the following file as a fix file process. This is for SELinux.

11. Finally start the normal boot process. In some references you can use the reboot command but in my testing, it was not as stable.

Coming back to my blog and my exam path

It's been a while since I updated this blog but wanted to keep people updated on my work and learning. Right now, I'm focusing on the Red Hat RHCE exam. About the end of 2012, I studied for the Red Hat RHCSA exam, which is the beginner exam focusing on the Red Hat Linux distro. The exam while difficult was a very good learning experience for myself, considering I'm still pretty new to the Linux world. Since the certification is only valid for three years, I'm working on the next certification level, the RHCE. This exam is much harder and going to be more of a challenge for myself. The last exam I was able to self study but I really feel that I would greatly benefit from taking the official training class, especially since my work is offering to pay for it. The downside is I won't have the time to full prepare to pass the exam 100% but at least it's going to be five days of asking questions and at least getting to take a exam (even if I fail). In other notes, I started up a site for the RHCSA and after it was abused by spammers, removed the entire MediaWiki install. It was painful but going to be an excuse to start it up again and remove all Red Hat trademarks from the site, just incase.
Posted by Rob at 1:09 AM No comments:

It's been a long time

This blog hasn't seen much attention in the past two years. Mostly I've been focusing on work and personal life, plus learning as well. Right now my focus on work is moving from system administration to more knowledge of scripting and operational tools. In the next few weeks, I'll start up posting my tutorials and also add more to certification study paths.
Posted by Rob at 2:56 PM No comments:

There's many many sources for education on the Internet that are free or nearly free. Recently I found a few links that are worth sharing.

Linux command line -
Linux the hard way command line - I haven't run through the site yet but this offers a more advanced tutorial than other sites I've seen. This looks really amazing, but I heard there was some issues with certain commands not work correctly. There's even a handy console session to help practice the commands.

The CLI Crash Course - This is a tutorial that is aimed towards the new command line user. The nice thing is a video class is also offered by Udemy for a very reasonable $9.

SQL -
Learn SQL the hard way - Another "learn the hardway" series, this one focusing on SQL. The examples and screenshots are clear as with the other methods.

Python -
Learn Python the hard way - This is another one in the series, but also offers video classes from Udemy for $29.
Invent with Python - I bought the hard copy book recently and enjoy the idea of learning to program while making a game. The book is available for free online but you can order a copy from Amazon as well.

GIT -
Git Immersion - This is more for coders and developers but it's also handy for the sysadmin or general user. Git is used for checking in code, and updating it as needed. This tutorial is actually very clear and easy to follow.

I'm working on the exam notes but wanted to write more details I found on the exam. Below are links that may be helpful for anyone studying for the exam.