I recently found out that my bicycle frame was cracked. I'm not sure when this happened but it was a small crack near the front and wasn't safe to ride. Specialized was great as they covered the frame and sent out a new upgraded model in the replacement. After riding the new frame around I found it to be some what bigger than the previous frame. The size wasn't any bigger but it felt much larger that it really was.

After taking a look around, I found that a local shop had the Giant STP in stock. I wanted to buy this bike last year but after calling around and never finding one in stock, I gave up. Around this time I also broke my collar bone and took a break from riding. So I decided to stop by the shop and just check out the bike, maybe buying it if it was really nice.

After looking over the bike it was in my favorite color, yellow and black. I liked the size, while it's listed as a regular size it's much smaller than your standard mountain bike. Appears to be a regular 15" frame but with much heavier duty frame and parts. The bike is also a 8 speed, with a single chain ring and chain guide in the front. While this is a big change from my 24 speed, I really kept the bike most of the time in the second chain ring which is similar to how this bike was set up.

The disc brakes were nice but I didn't like the levers, they felt cheap. Overall the bike was pretty nicely set up. I really liked the fork which was a air/spring combo, much more adjustments than my current bike. Also I liked the larger front axle which was more durable than my old bike.

Just to make sure how it rode I took it for a short test ride. Around the back of the bicycle shop I rode the Giant STP and found that it felt like a BMX cruiser than a mountain bike. It was very compact feeling and easy to turn, but still felt stable. I ended up buying the bike with the idea I would use this for more trail riding and keeping my old bike for street riding.

While I wanted to buy a road bike earlier this year I didn't like the position of leaning over the bike. After thinking about different choices I like this bike and maybe later this year but a cruiser just for riding around town.

Something else while I wanted this bike was durability. After I found out how the previous bike frame cracked I was really surprised that how little I rode damaged the bike so much. I'm hopping this time the new bike lasts allot longer.
Posted by Rob at 12:54 AM No comments:
Labels: bicycle giant stp

HDR photo of the Mission 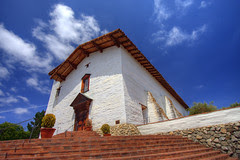 IMG_0036_37_38_39_40_edited
Originally uploaded by robscomputer
I took this photo of the Mission during mid, with really bright light. It's 5 shots combined into 1 to make a HDR image.
Posted by Rob at 1:53 PM No comments:
Canon 40D

I recently bought a new digital SLR, a Canon 40D. My old camera was getting a bit slow especially writing to the cards. With the recent Canon rebates I took advantage of this to get a small discount of $200. Just playing the camera I find it's much faster than my old 10D, in terms of writing and image taking.

I'm redoing my entire Smugmug photohosting site. Basically I had too many personal snap shots and I'm cleaning out the questionable photos. These will be moved to either Flickr or Picasa, still trying out the tools they both offer.
Posted by Rob at 1:30 PM No comments:
Flickr

I created a Flickr account a few months ago but never uploaded anything. Recently I'm switching my Smugmug account to old host my really nice photos while I want something else for the personal pictures. While it's pretty easy to use I find that the linking of pictures is more difficult because Flickr requires you to link a web page instead of the images by themselves.

Also a few photos from the last Goodguys show in Pleasanton, CA. These are shot with my new camera. Looks pretty good, but I need to improve my Photoshop adjustment skills. 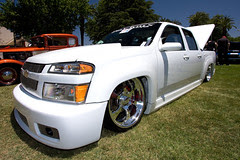 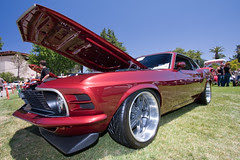 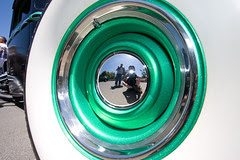